Currie Group has announced it will be bringing its mobile showroom to Stand A28 at Visual Impact in Brisbane next week, giving visitors to the show a VIP preview of its latest technology Roadshow on what will be the show’s largest stand by a country mile.

Currie Group is well known for its innovative Roadshows, trucking the latest technology around the country to provide print service providers with hands-on access to the very latest technologies.

Now, Visual Impact visitors will have the opportunity to see its latest iteration, which showcases inline automated booklet production via the innovative combination of an HP Indigo 7900 Digital Press with a Horizon 200 series booklet maker.

The combo, which made its world debut at PacPrint 2017 in Melbourne last year, delivers true ‘end-to-end’ productivity and solutions and is a perfect illustration of automated printing – a theme which is underscored by the company’s eye-catching Robot, which will also be on the mobile showroom.

“The Horizon booklet maker takes the sheets from the HP Indigo and, in one operation, stitches, folds and trims, to deliver a finished product onto the conveyor at the far end, all without a single touch point,” explains Currie Group Sales & Marketing Director, Phillip Rennell.

The setup, which Rennell admits only fits into the specially modified truck ‘by the width of a sheet of paper’, will provide an interesting addition to the diverse range of technology on show at the Brisbane Convention & Exhibition Centre.

It will be complemented by a range of finishing equipment – Horizon RD-4055 rotary die-cutting system, Horizon SmartSlitter sheet cutter and creaser, Horizon CRF-362 creaser and folder, Foliant Mercury 400SF laminator, which will be set up on the apron in front of the mobile showroom.

The company’s involvement at Visual Impact made sense, says Rennell, particularly given that the company is about to kick off another major Roadshow from outside the company’s showroom in Queensland’s sunny capital on 2 and 3 May, before heading South to Albury and Adelaide.

“We have a long association with VI, so we know the value of the show and its importance to the industry,” he said. “Given that our next Roadshow event will start outside our Brisbane showroom early next month, VI Brisbane was the perfect opportunity for us to give some of the industry’s key decision makers a look at technology many of them may not have had the opportunity to see at PacPrint, while also kicking off the Roadshow.”

Visual Impact will open its doors next Thursday, 19 April, and run from 10am till 6pm on Thursday and Friday, and from 10am until 4pm on Saturday 21st. To skip the queues, register online or for more information about the show, go to the Visual Connections website. 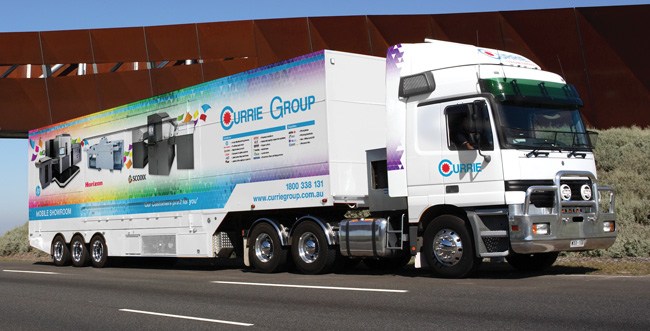